MAGNATRAC®: Passing Down “Old School” Skills to a New Generation

If there’s one thing that’s noticeably different in generation Y, and Z, (and even some Generation X-ers) it’s how the shift toward tech-driven jobs and a modern state of mind has impacted the way traditional homeowners manage their properties or think about homesteading.

It’s not that it’s a bad thing, but the technology boom has caused younger Americans to lose the opportunities to learn basic skills such as welding, how to use farm machinery, and even operate a chainsaw. Rather, they hire it out instead of using a DIY approach.

But a hard day’s work is still valued, no matter what generation you were born in. More adults and homeowners are starting to go back to the “old” way of doing things on their own; whether it’s to safe money or the thrill of the ride, today’s younger generation is finding that some of the best ways to learn traditional methods of doing things on a homestead is to learn directly from the generation that raised them.

Randy’s family is just one example. He’s owned a used MT1800 crawler tractor for several years. After fixing up the worn, rusted machine it looked and worked just as good as it did decades prior. But when around-the-house projects became more extensive jobs, Randy traded it in for an MH5000 crawler tractor and started using the opportunities as life lessons for his sons.

“My oldest son [used the crawler] to dig his first trench, to put in electricity to the pool” Randy says, “[it’s] a very useful machine, in a small size, that’s easy to operate and maneuver.”

His sons have even learned how to weld. Together, the Randy family welded a set of pallet forks to use on their MAGNATRAC, which they utilize to load equipment onto trailers and into the back of pickup trucks. 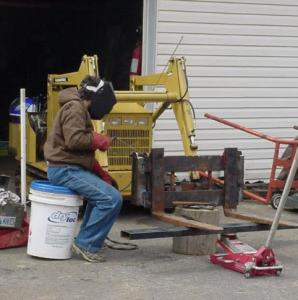 Randy has taught both of his sons how to work on and operate equipment, using MAGNATRAC machines. The easy to use dozers and crawlers are small, yet powerful enough for young users that can be trusted with big tasks. From building pools to simple tasks like digging dirt with the hoe attachment, Randy’s MH5000 has become an important tool when it comes to passing on a hard work ethic to his kids. 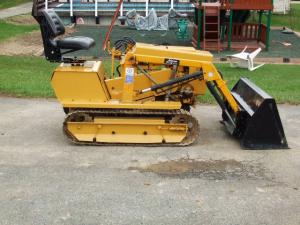