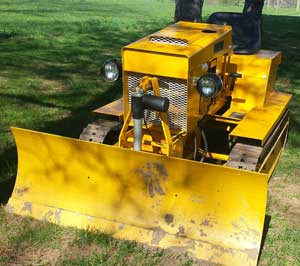 “I have included pictures of my MAGNATRAC MT1800 that I purchased from a older gentleman who took it apart piece by piece over the winter and restored it. The blade I purchased from you a month ago and fabricated a mounting bracket and added a linear actuator to raise and lower the blade in place of the cable winch which was added before I purchased it. I will be adding a hydraulic pump, controls and cylinders to raise and lower the front blade as well as adding an additional rear 3 point hitch so that I can use my existing 3 point hitch attachments on my Magnatrac.” 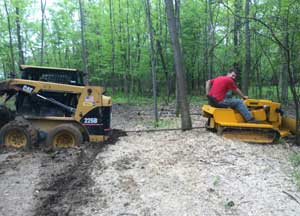 “I ran into a situation last weekend as I was called to assist a friend of mine, who was clearing some land to build a house and was having a hard time with a borrowed skid steer, that he had gotten stuck in the mud and I was able to pull him out as shown in the picture. After getting the skid steer stuck four times, we parked it and used the Magnatrac to pull the trees out once cut and move the chipper around in the mud. My friend and were amazed of how well the Magnatrac did in the mud without ever getting stuck or sinking.” 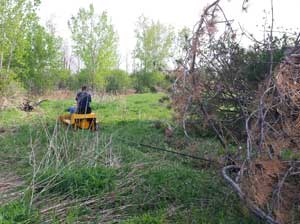 “I have included another picture of a friend of mine who was pulling a 40 foot pine tree thru a field that we did not know what was on the ground including bottles, cans and metal that would have cut thru rubber tires. My next purchase will be a backhoe and then a newer Magnatrac dozer with rubber tracks to plow snow from my paved driveway and keep the MT1800 for use in the mud and dirt.” 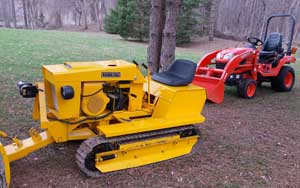 “I have always wanted a Struck tractor from the first time I saw them advertised in Popular Mechanics back in the 70’s! Now at 50 years old, I wish I had purchased a new one years ago. I have owned John Deere, Kubota and Farmall tractors in the past and have owned numerous properties including rental houses and hunting land and could have used a tracked tractor instead of a wheeled tractor.”

“Every time I have called or e-mailed your company I have always gotten back a response in a very timely fashion. Everyone I have dealt with have been great in answering my questions and ordering parts which arrive within days of ordering them. I would highly recommend your company to anyone looking to purchase a MAGNATRAC; as they are built of the highest quality and parts are readily available along with great customer service. Thank You and I look forward to purchasing additional equipment from your company in the future!” Kevin — Macedon, NY

Looking to Share Your Story? Want to be Featured on our Blog? Email: info@struckcorp.com for more information.